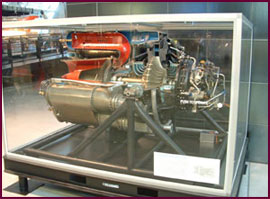 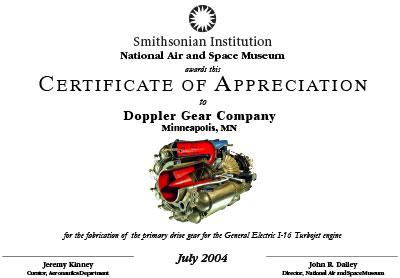 Doppler Gear Company was recognized by the Smithsonian Institution’s National Air and Space Museum for work producing the primary drive gear for the General Electric I-16 Turbojet Engine display. As a gear job shop, Doppler Gear was contacted by the curator of the Smithsonian to help realize this display for the Steven F. Udvar-Hazy Center at the Dulles International Airport. The gearing application provided motion to the internal cut-away of the display.

The I-16 (which later became the J31) was the first turbojet engine produced in quantity by the United States and used in the Bell P-59 Airacomet. The engine was developed in 1941 from the British Wittle W1. General Electric Delivered a total of 241 J31s to the Army Air Forces before production ended in 1945.

GE developed the engine on display here for the U.S. Navy as a 100-octane, gasoline-burning version of the standard J31 engine, which normally ran on kerosene fuel. Development began in 1943, when the government believed that future tactical needs would require turbojet engines to use the same fuel as reciprocating engines. Before it was made into a cutaway, this engine, along with a Wright R-1820 piston engine, powered the Ryan FR-1 Fireball, the Navy’s first partially jet-powered aircraft.